A downloadable game for Windows

The prisoners have taken control, forming a militant religious group that worships an entity known only as the Umbral.

You were sent to investigate -- and now you are trapped.

From the developer of the critically-acclaimed narrative adventure game Sagebrush, EFFIGY is a retro first-person shooter set in a huge, mysterious interconnected world. Blending the fast-paced action of classic shooters of the 90s with the exploration and nonlinear progression of the Metroidvania and Souls genres. Scour the Black Moon to find new weapons and abilities that can completely change your playstyle, and piece together the strange history of Gehenna by scanning artifacts and translating strange runes.

EFFIGY will be released in three episodic content drops through Steam's Early Access program, with each release adding new content to the core game and progressing the story.

A HUGE, INTERCONNECTED WORLD
Each released episode will add new regions to Gehenna that build upon one another to create a vast non-linear world to explore. Questgivers, abilities, and items you find along the way will open up new possibilities for exploration.

AN ARSENAL OF DEADLY WEAPONS AND SPECIAL ITEMS
Blast enemies around corners with the reflective beam of the mining laser, or use the Pulse Buckler to deflect rockets back where they came from. Each episode will add new and more wild weapons and items, allowing you to experiment and tweak your playstyle.

CHUNKY RETRO GRAPHICS
Inspired by the classics of the genre, Effigy has a low-poly, lo-fi aesthetic just like you remember.

The (now outdated) public pre-alpha demo is available below and as part of the Haunted PS1 Demo Disc Collection. Check out a work-in-progress early portion of the game: Two full levels, five weapons, two enemy types, and mysterious characters to chat up.

does the black moon howl?

There is a spot, in the room where you go and its all that moving blood like texture...the first room of such if there is more, there is a hole in the corner of the room....I fell in and you can not get out....   :(

I liked the demo overall.  I enjoy the openness of the environment, and the feel of the combat.  I think maybe some of the areas were too big for how much content they had though.  It felt like it could be a tighter experience. Either that, or filling those big areas with bigger enemies.


I did not like falling down and having to run through all the same places to get where I was, that was harsh!

Hi team, do you have an email I can message you on regarding your game?

Does this demo have a new levels?

Good demo that i *think* i managed to sequence break on accident. Pretty good fun and i'm definitely going to be keeping an eye on this in the future!

Sequence breaking isn't that hard in this demo tbh :) But I'm glad you had fun and I hope you do keep checking in on the game!

I really enjoyed the game and had a lot of fun with it.

If you don’t mind me asking, how did you do the lighting, I guess that the lighting is baked onto static objects (though maybe I’m wrong) but for dynamic objects did you use light probes or vertex lit real time lighting or something else? it looks really cool :)

Hey! Thanks! It's a mix of baked lighting and light probes for dynamic objects.

If this is only a proof of concept, the game will be amazing. Loved the old-school vibes and the atmosphere.

Waiting for the full release. :)

Thanks for checking it out! I hope the final game matches your expectations :)

For a proof of concept, I can say quite readily that I am sold on it. Genuinely fun oldschool-style FPS, and I can't wait to see what future updates have in store! Gameplay starts around 0:24.

Hey guys, if you speak spanish and want to listen to a discussion podcast about Effigy, watch our video:

Hey guys, love the demo and love the early 3D graphics style. Gives me so much nostalgia.

Quick question though, what is the font used for the logo? Would love to use it for future design projects.

Thanks for the kind words. So glad you enjoyed it!

The logo font is Obelisk MXVV, which you can find here: https://www.fontspace.com/alexanderblv/obelisk-mxvv

Reply
zarazlf2 years ago
Duuuuuuuude.. this game was very fun to play, the graphics is also awesome, keep up the good work!
Reply
Thee2 years ago

Very good for a pre-alpha. Big suggestions would be a map system that marks collectables per area, and maybe a way to traverse maps even quicker? Running is good but the open areas are so large that it can still feel a bit slow.

This is one of the more interesting "throwback" fps titles I've tried. It's basically Quake/Unreal meets Metroid Prime with Dark Souls bonfire system. It feels like more a proof of concept than anything at this stage but I'm sold on it. Level design could use some work (maybe play Arcane Dimensions for Quake for inspiration), but it's really atmospheric and has a feel that sits somewhere between Quake's grungey horror feel and Unreal's alien awe. I like the low detail look, and areas are visually distinct enough for navigation's sake. The guns feel good, but the hitboxes aren't great. I feel like I shot through enemies a few too many times. Also, enemies could be a bit more distinct from a gameplay perspective.

Still, as a proof of concept this is fantastic. I'll definitely be keeping my eye on this.

Thanks so much for checking it out! I do view this demo as more of a proof of concept than a polished release. It's still early days so yeah, there's plenty of stuff that needs work, but I'm really glad the intended vibe is coming through!

we need an update!

Like a devlog update or an actual update to the game? Cause it's been less than a week -- gonna need some more time for that  :)

Really enjoyed the demo! I'd suggest putting more screenshots on the page though, might draw in more people than just that title screen pic you have now.

Thanks! I'll be sure to grab some more screenshots for the page.

I gave it a try and thought...

The Good :
- Retro feels in graphics. Music is okay too.
- The inventory UI is accessible enough and at least it shows the descriptions for items and upgrades.
- There are no shortage of ammo or health as enemies respawn on using spawn points, and they refill your health.

The problems
- LACK OF OPTION MENU and unable to tweak important settings, such as SENSITIVITY, KEYBINDS, TOGGLE RUN or BRIGHTNESS. (Bonus retro point if you're able to put "Centered Weapon" option!)
- It would be nice if enemies had sound alerts on spot, like in Doom or Quake.
- Is implementing maps, or "upgrades/key items stat tracker" possible? It's fairly important for OCD players like me.
- While it shows the projectile path, Laser doesn't shoot where the crosshair points to.

Hoping the game to be improved and eventually finished!

Thanks for the feedback. Some of this is just not implemented yet, like the options menu, but all of these comments are helpful!

It's one of the best retro FPS I downloaded here if not the best. I like the world, it feels a bit like Unreal. It plays well, doesn't do anything mindblowing yet, well it's promising. Some issues : didn't find how to open a pause menu (or is the inventory the pause menu?). The enemy pathfinding doesn't deal very well with changing heights. The laser is the stand out weapon but doesn't shoot where your crosshair is. Some maps are really big for no apparent good reason, like the last one where you have to disable the forcefield,I spent a while going everywhere and often there was nothing to find. Was the effect for getting hurt the same than for getting healed? It's annoying to have to hold the sprint button. At the same time I guess it would make the melee enemies far easier (they aren't hard though).

Thanks for the feedback. Glad you enjoyed the game. It will grow and change a LOT before a proper paid release. 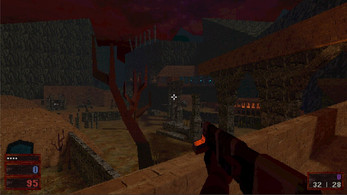